Charter for a More Compassionate World

Text of the Charter for Compassion

To sign the Charter for Compassion please click this image.
The principle of compassion lies at the heart of all religious, ethical and spiritual traditions, calling us always to treat all others as we wish to be treated ourselves. Compassion impels us to work tirelessly to alleviate the suffering of our fellow creatures, to dethrone ourselves from the centre of our world and put another there, and to honour the inviolable sanctity of every single human being, treating everybody, without exception, with absolute justice, equity and respect.

It is also necessary in both public and private life to refrain consistently and empathically from inflicting pain. To act or speak violently out of spite, chauvinism, or self-interest, to impoverish, exploit or deny basic rights to anybody, and to incite hatred by denigrating others—even our enemies—is a denial of our common humanity. We acknowledge that we have failed to live compassionately and that some have even increased the sum of human misery in the name of religion. TO SIGN THE CHARTER PLEASE CLICK THIS IMAGE:


We therefore call upon all men and women to restore compassion to the centre of morality and religion ~ to return to the ancient principle that any interpretation of scripture that breeds violence, hatred or disdain is illegitimate ~ to ensure that youth are given accurate and respectful information about other traditions, religions and cultures ~ to encourage a positive appreciation of cultural and religious diversity ~ to cultivate an informed empathy with the suffering of all human beings—even those regarded as enemies.

We urgently need to make compassion a clear, luminous and dynamic force in our polarized world. Rooted in a principled determination to transcend selfishness, compassion can break down political, dogmatic, ideological and religious boundaries. Born of our deep interdependence, compassion is essential to human relationships and to a fulfilled humanity. It is the path to enlightenment, and indispensable to the creation of a just economy and a peaceful global community.

Religious thinker Karen Armstrong has written more than 20 books on faith and the major religions, studying what Islam, Judaism and Christianity have in common, and how our faiths shaped world history and drive current events.

A former nun, Armstrong has written two books about this experience: Through the Narrow Gate, about her seven years in the convent, and The Spiral Staircase, about her subsequent spiritual awakening, when she developed her iconoclastic take on the major monotheistic religions -- and on the strains of fundamentalism common to all. She is a powerful voice for ecumenical understanding.

Armstrong's 2008 TED Prize wish asked us to help her assemble the Charter for Compassion, a document around which all of us can work together for peace. In late fall 2008, the first draft of the document was written by the world, via a sharing website, and 160,000 people contributed ideas and language.

In February 2009 the words of the world were collected and given to the Council of Conscience, a gathering of religious leaders and thinkers, who crafted the final document. The Charter was launched in November 2009.

"I say that religion isn't about believing things. It's ethical alchemy. It's about behaving in a way that changes you, that gives you intimations of holiness and sacredness."

(from Charter for Compassion) 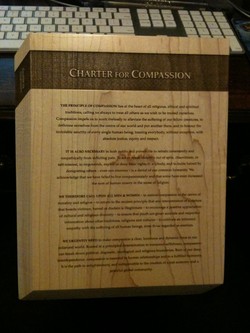 Charter for Compasion Creative Commons License from Flickr 4357667047_2446b8f805_o
The Global Compassion Council is the advisory body for the Charter for Compassion. Recruited from around the world, the Council is a confluence of leaders of the movement in the realms of government, business, education, philanthropy, religion & spirituality, health care, the environment, peace, and social justice. The chair of the Council is Rev. Joan Brown Campbell, a devoted activist for peace and social justice. Among many other "firsts," she was the first ordained woman to be General Secretary of the National Council of the Churches of Christ in the USA; and the first woman Director of Religion at the historic Chautauqua Institution, a center for religion, education, the arts, and recreation. The governing Board of Trustees is drawn from the members of the Council.