Honoring the life and literary legacy of an American original. 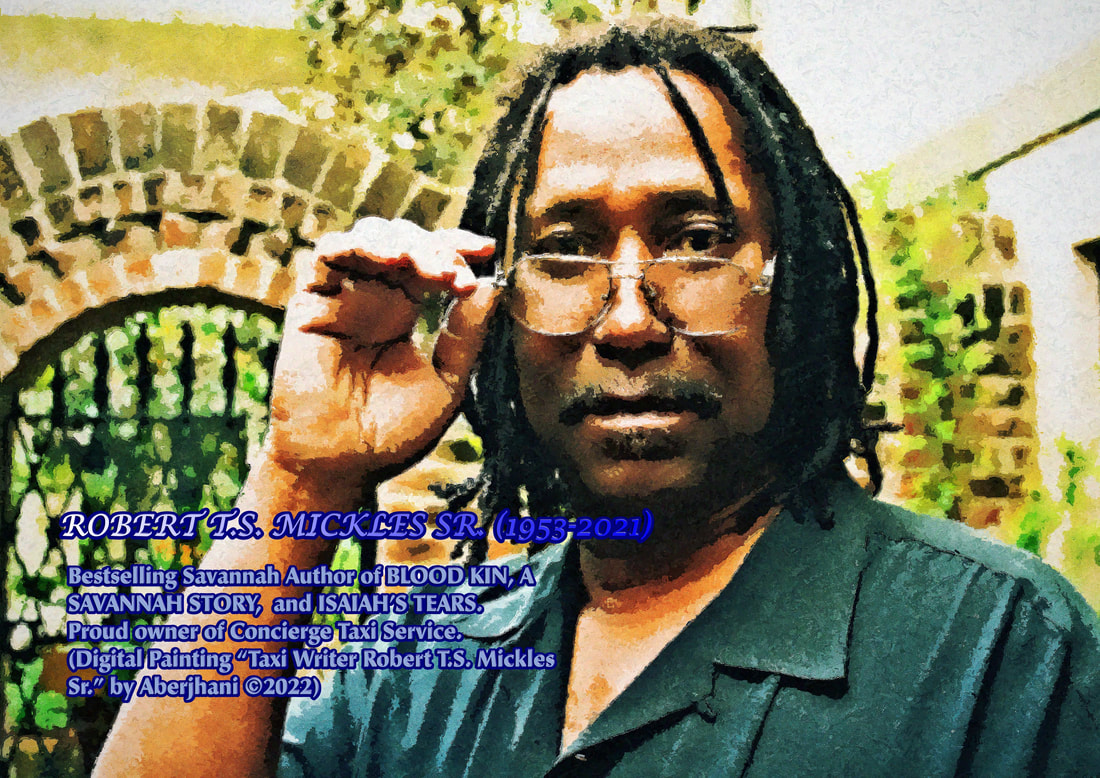 Robert T.S. Mickles Sr. was one of the city of Savannah’s (Georgia, USA) finest storytellers. To him, the fact that he passed away on the morning of December 31, 2021 (b. July 6, 1953) from cancer as one cycle of time was ending and another beginning, would have been spiritually poetic. He would have appreciated me describing all the exploding fireworks ringing in the new year as a celebration of his arrival in a new home on much higher ground.

Robert had a talent for blending African-American folklore and history in a way that made readers feel like they were not just reading about it, but experiencing peculiar moments of it. I had the honor and privilege of working with him on both his novels dealing with slavery and its aftermath in the Savannah and Washington D.C. areas: Blood Kin, A Savannah Story (2007) and Isaiah’s Tears (2008). My hope had been to help him complete a third book and then publish new editions of the older titles.

We first met when I was managing a Waldenbooks store in the brand new Savannah Mall and he was working as a mall security guard. Since we were 2 of only 3 Black Men working in non-restaurant positions in the mall at the time, we greeted each other almost every day when beginning our shifts. In the course of a 5-minute walk from the parking lot to inside the mall, we might discuss anything from philosophy and recent crimes in Savannah to previous adventures in the military and the prospects of a Black Man one day becoming president of the United States.
We eventually moved on to different jobs and neglected to stay in contact.

​Then, one day years later, after I somehow had managed to complete several books and become a stay-at-home caregiver, he knocked on my front door. Standing on the porch, he said excitedly with a big smile, “Guess what I did, I wrote a book!”

Although he had never expressed (not to me anyway) interest in any kind of literary pursuits before, I wasn’t completely surprised by this news. He possessed the kind of imagination, intellect, and faith which made him believe he could and should become a well-known author if he so desired. After reading his manuscript, I told him he had produced a decent first draft but we would need to work on it to turn it into a publishable book.
​The presumption that his readers would understand his characters’ missed-takes on certain historical events did not work as well as we had hoped. The most glaring in Blood Kin was when one said General Ulysses S. Grant had presented the city of Savannah to President Lincoln as a Christmas gift, while the author himself knew it was General William T. Sherman who made that gesture which still causes supporters of the Southern Confederacy to grind teeth in their sleep. A film director such as Quentin Tarantino can bend facts and get away with it on big and digital screens but the technique was not applied as effectively (something for which I bear some responsibility) in Blood Kin. Readers and lecture audiences were forgiving and later welcomed the publication of Isaiah’s Tears.

rt was too humble to call himself a literary celebrity, but for a significant period of his life that is exactly what he became. In-depth articles about him appeared in Connect Savannah, The Savannah Morning News, Skirt Magazine (in which he showed his support for feminists by wearing a skirt that I teased him about), The Savannah Tribune, and other publications.

He ingeniously combined his literary pursuits with his business as the owner of Concierge Taxi. At different points in my life when I was car-less, he drove me wherever I needed to go; while riding we would discuss potential new projects. The passengers he transported back and forth from the Savannah Hilton Head International Airport rarely parted without purchasing at least one of his books. This entrepreneurial strategy eventually placed him among the city’s most recognized authors if not one of its most acknowledged.
​
He was thrilled when BLOOD KIN reached number 4 on ESSENCE Magazine’s list of national best sellers and he even got to share a spotlight with the magazine’s now Editor-in-Chief Emeritus: Susan L. Taylor.  He did the same with the late Civil Rights icon, author, and humorist Dick Gregory (please see photo slide for images).

​Mickles’ accomplishments as an author, marriage to his dynamic wife Sharon, and love for his family formed the primary anchors for his life. It was good for him to remember that later when coping with a catastrophic accident that ended his taxi business and when dealing with serious health issues.
After the pandemic hit, we shared a few front porch socially-distant visits. During one such meeting, he reflected on the 3 decades which had passed since we first met and said: “You know, I don’t really call too many people my friend. But I call you that because you really are my friend.”

And he really was mine.