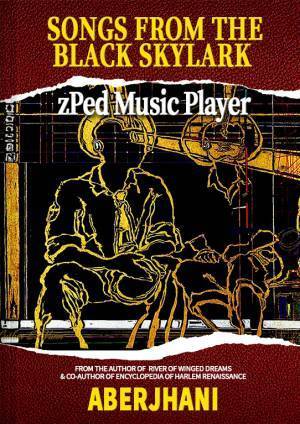 Songs from the Black Skylark zPed Music Player (ISBN 978-1977037473, formerly known as Christmas When Music Almost Killed the World) occupies a literary category of its own making. The easy way out is to recognize that it is very much like an extended song on the nature of life, love, death, and music. Enter the world of its struggling hero Danny Blue and you enter one where few things are exactly what they seem to be and where everything is filled with powerful meaning and significance.

Diving into the Mystery

Written by the Savannah, Georgia-born award-winning author and poet Aberjhani, the novel is described as one that takes readers “inside the world of Danny Blue, a young man struggling to make peace with the death of his girlfriend, a gifted artist named Valerie Hyerman whose passing sparks the creation of a controversial spiritual movement. Was her death suicide, murder, or something completely different from either?”

The Black Skylark Sang a Prophecy 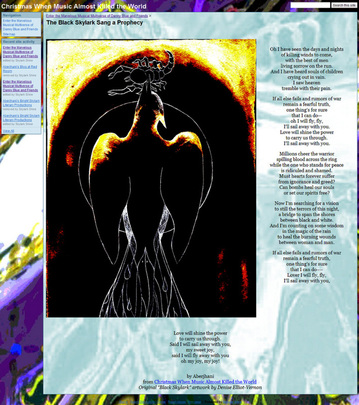 Oh I have seen the days and nights
of killing winds to come,
with the best of men
living sorrow on the run.
And I have heard souls of children
crying out in vain.
I saw heaven
tremble with their pain.

Millions cheer the warrior
spilling blood across the ring
while the one who stands for peace
is ridiculed and shamed.
Must hearts forever suffer
from ignorance and greed?
Can bombs heal our souls
or set our spirits free?

Now I’m searching for a vision
to still the terrors of this night,
a bridge to span the shores
between black and white.
And I’m counting on some wisdom
in the magic of the rain
to heal the burning wounds
between woman and man.

Addressing as it does the potential link between something as catastrophic as mass suicides and as celebrated as popular music, the novel has stirred some controversy. Nevertheless, the author’s style and literary daring have drawn favorable comparisons to such writers as Philip K. Dick, Khalil Gibran, and Franz Kafka. A particularly unique aspect of the novel is the author’s use of song lyric’s as an integral element of the overall prose narrative. Lyrics featured throughout the book are included in an appendix at its end.

Intensely Visionary and Mystically Poetic: What's It All About?

The stunning truth unfolds in Froggtown, a college community where many people are said to have “died dirty” and wander the streets in search of release from a spiritual limbo.  Such a town seems an unlikely place for a superstar musician like Jimmy Redfyre to kick off his tour on Christmas Eve, or for his main rival Ruzahn to keep popping up in Danny Blue’s life. Moreover, how is it that both singers seem to have released songs about his life? Equally bizarre are the strange changes that Danny Blue himself begins to experience and that appear to be causing him to evolve from an ordinary human to something not so ordinary at all. Written with the visionary intensity of Franz Kafka, the mystical poetics of Khalil Gibran, and the psychological complexity of Philip K. Dick, Songs from the Black Skylark zPed Music Player is a one-of-a-kind work of extraordinary modern fiction.

FROM AUTHORSDEN ON OPENING CHAPTER "A LOST ANGEL SINGING POETRY":

Reviewed by Miriam Center6/11/2006
This certainly makes the reader want to know more of the story. Keep going, friend. You're almost there. And I want to be there when you arrive!

Reviewed by Sandra Mushi4/21/2006
Such an intriguing write! I didn't know whether to sit still or fidget around as I read this. The description here is just outstanding! Wonderfully written, Aberjhani!

God bless,
Sandie.
​
Reviewed by Joyce Hale5/25/2005
Your imagination is exceeded only by your ability to convey your thoughts to others with words, Aberjhani. Stunning!
Peace.
Reviewed by A Serviceable Villain4/22/2005

Reviewed by Mitzi Jackson3/21/2005
wow.......this is very exciting
such a mixture in short poetic verses
very intrigued to see where it all is going
caught~~~

You portrayed Danny Blue's dream so realistically. Between the earthy mud and celestial orchids you gave the dream a mystical quality.
I'm as curious as Danny Blue is to find out whose bed he woke up in and where the Z-Ped music player disappeared to. But mostly who's the dude sitting on the floor against the wall near the door? Is he there to keep Danny Blue from "escaping?" Or there to illuminate his bizarre predicament?
I have no doubt you will answer my questions in the next exciting installment. A LOST ANGEL SINGING POETRY, while beautifully written with a mystical flair, like all superb writing, draws the reader deep into the story, stimulating the desire to know more... and quickly!
~Mari

Reviewed by Zaomi Samada3/20/2005
If this is the opening, you've intrigued me, Aberjhani, and I'd expect nothing less from you. So I look forward to more. ~~Nordette

FROM AUTHORSDEN ON: WHIPS AND HAMMERS OF MEMORY UNKIND

Reviewed by David Arthur Walters6/23/2005
"Powerful" is a redundant term here but is still appropriate. I will have difficulty writing about Poor Little Me now.

Reviewed by Mark Rockeymoore6/21/2005
this is one of the most powerful pieces of prose i've ever read, hands down. i literally couldn't take my eyes off of the screen. kudos, big bruh...

Reviewed by Hasan Abood6/19/2005
This is a masterpiece, my friend. I enjoyed reading every single word. I am very excited to your work in the future. Great job!
Reviewed by Phyllis Du'Gas6/13/2005
Dayuummmm....this was extraordinary!

Reviewed by Karla Dorman, The StormSpinner6/11/2005

Aberjhani,
Talk about a jump start...is there nothing you can't write?? WOW. Excellent write....definately a keeper.

(((HUGS))) and much love, your friend in tx., karen lynn. :D
Reviewed by Jerry Bolton6/10/2005
What the hell can I say about this scream. That I only wish I had the cajones to do the same thing. For years I have tried, numerous ways to put my own Whips and Hammers down for the world to see and for me to deal with. With this short story, you have started on that journey I believe. Will you finish the journey? That is up to you, but you damn well have kick-started it. To put forth the intiomate details of yourself and your parents has to be a two-pronged way of looking at it. The Whips and Hammers will never leave you alone until the story is told, if even then. God bless.

Reviewed by Sandra Mushi6/9/2005
Aberjani, this is so profound! So heart-felt, sad ... I wonder what kind of person the poor boy grew up to be? With all the demons in his closet haunting him. Did he let go? Did he make peace with himself? Has he learnt to love himself? Most would hate themselves after such experiences - and blame everything on themselves.
Its such a pity! Mrs Ruby - bless her heart. Too damn well written!!!
God bless,
Sandie.